Sharing Facebook | Twitter | Google+
「発表会」 - Happyokai is a Japanese language workshop where students present their skits in front of teachers and classmates.

On Tuesday June 28th, I participated in the Japanese language classes’ Spring 2016 Nihongo Happyoukai. I worked with an assigned group from my Japanese B1 Class. This group consisted of classmates Evelyn (Evie – Brazil), Lalitya (Tia – Indonesia), and Mavluda (Mavi – Uzbekistan). At first, I wanted to perform a song in which I would be required to write the lyrics in Japanese. However, my group consisted of friendly and charismatic classmates so I couldn’t pass up the opportunity of working with them. We decided to culminate ghost stories from our home countries and create a 12-minute skit titled “Chikaku Ni Iru”(They Are Close…). 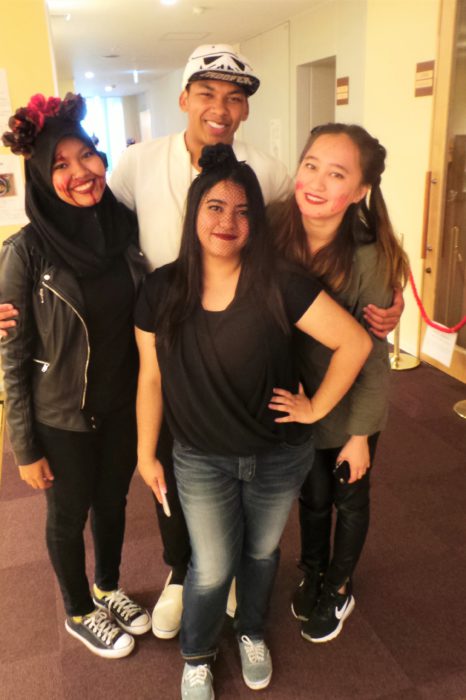 The brainstorming was a lot of fun, but the effort we put into the characters, story flow, and grammar was anything but easy. On the day before the performance, I had to reduce my ghost story to half its original size and add casual grammar that I wasn’t familiar with! That’s just one example of how much vigor we expressed to make the Japanese conversations as authentic as possible. To make the story all the more intriguing, we worked with Fukushima-sensei and timed the lights to turn off at specific times. We barely needed any props…just fake blood and empty pizza boxes were all we needed for this skit to work.

The Happyoukai is a showcase of some sort, displaying to fellow classmates and teachers your progress in Japanese by way of a PowerPoint presentation, skit, song, or speech. My overall opinion is I really enjoyed the challenge. I’m not that great in Japanese yet, considering this is my third year learning Japanese and my first semester at Tokyo International University. Nonetheless, I think I was able to calm down my nervousness and show my core self while speaking Japanese. The crowd of students seemed genuinely interested in what we were saying in the skit, and their scared faces made us feel accomplished. I am so proud of my classmates! We were all nervous together as we delivered lines on the stage, but  my heart was smiling as I looked into their eyes as they added personality to the scripted conversations and stories within the skit. I feel as though we bonded really well from this experience, and our friendships will only continue from grow from now on. 🙂 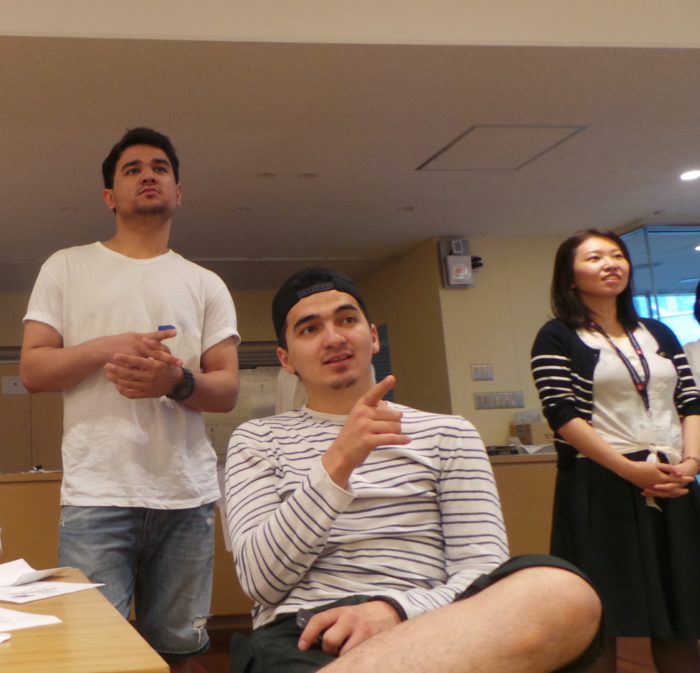 Mavluda: “Happyoukai is one of the funniest events during Intensive Japanese class. We improved our Japanese language skills through preparing the script and having fun. Also each team worked hard. And this we could see in their performances.”

Evelyn: “I think the happyoukai was a really fun and good experience, where together we made a crazy story and learned a little more Japanese than we did before!”